We use cookies to improve usage experience, analyse our data flow and personalise content. By continuing to use this page, you agree to the use of cookies. Lasi vairāk šeit! 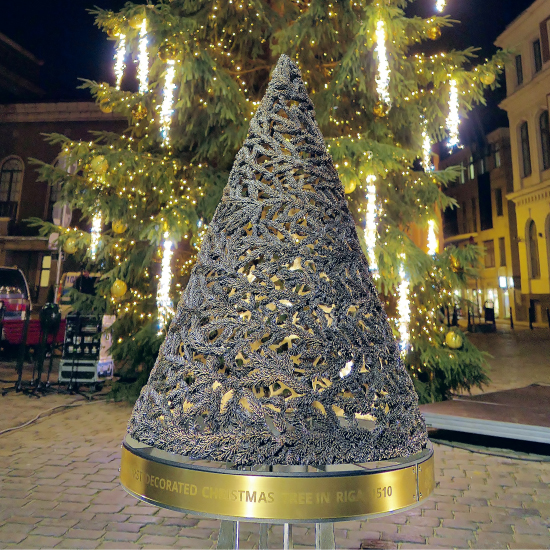 Reminding us of the first decorated Christmas tree in Riga, in 2017 the The Fir was created with the support of the Rietumu Bank. The bronze cast cone-shaped fir sculpture with delicate symmetrical threads of branches has found its permanent home in the Town Hall Square. It carries the message of Riga as one of the first European cities where decorated Christmas trees were found.

The legend of Riga as one of the first cities in Europe where the tradition of decorating the Christmas tree began, has 500 years later inspired a new art initiative in the capital of Latvia. The environmental art festival, The Christmas Tree Trail, was born in 2010, – the only urban art and environmental design festival in Europe with a Christmas theme – has grown and evolved over the past ten years thanks to the dedication and enthusiasm of its author Guntars Kambars and his team. More than 200 original environmental art objects have already been created and implemented.

The aim of the festival is to encourage creativity in environmental art by exhibiting original authors’ works in the urban environment. The intergenerational unifying format enables creative competition in which professional artists, designers and students of the Art Academy of Latvia (AAL) interpret the evergreen tree – the symbol of life – in objects of environmental art using new experimental forms, materials and styles. Particular attention is paid to the use of light design in the works. Latvian entrepreneurs have also become involved in the festival by supporting artists and assisting in implementation of the exhibits.

Each year, for a whole month from the beginning of December, the festival grows into a unique broad-scale joint exhibition in the centre of Riga, also spreading out to the environs of the city. Rigans and guests are invited to take a stroll along the Christmas Tree Trail, especially attractive in the evening hours when the city lights are turned on and the artistically illuminated environmental art objects spring up in a new form.

At the beginning of January 2019, a retrospective exhibition entitled The Story of the Riga Fir Tree featuring some of the finest authors’ works was exhibited at the European Parliament in Brussels. The travelling exhibition provided a brief insight into the festival of environmental art objects, highlighting the role of Riga and its historical connection to the origins of the tradition of decorating the Christmas tree in Europe. At the end of the year, in November, marking the 55th anniversary of the Twin City link between Riga and Pori, this exhibition travelled to the town of Pori in Finland. In December 2019 and January 2020, the exhibition will be on display at the Riga City Hall and the premises of Riga Austrumu, Pārdaugava and Ziemeļu Executive Boards.

The exhibition The Story of the Riga Fir Tree combines works by artists and designers that differ in their content and styles, revealing a variety of ideas and different artistic impressions while making reference to Latvian cultural heritage, ethnography and handicraft, and highlighting the beauty and attractiveness of local Latvian natural materials. The works selected for the exhibition feature classical traditions and experimental solutions in environmental art, as well as sparkling humour and irony. Some environmental objects emphasise the social dimension by engaging various communities in their creation.

Several festival objects have also been exhibited in the capitals of our closest neighbour states – in Tallinn and Vilnius. The festival has also been noticed and appreciated in the media of Germany, Italy, Japan, Finland, Russia and other countries.

The publication The Story of the Riga Fir Tree was produced as a creative link to the exhibition of the same name. This edition comprises the best works of the festival as selected by the competition’s Art Council, including the latest projects of 2019. The artworks are not arranged in chronological order but rather thematically in 9 clusters, thus creating a symbolic resemblance to a young fir tree stand. The diversity of ideas, individual styles and messages of the authors, the variety of materials, the uniqueness of handiwork as well as the craftsmanship, the specially selected and newly discovered places in the urban environment are the unique qualities that characterise the festival.